The purest and most thoughtful minds are those which love colour the most.
John Ruskin, art critic 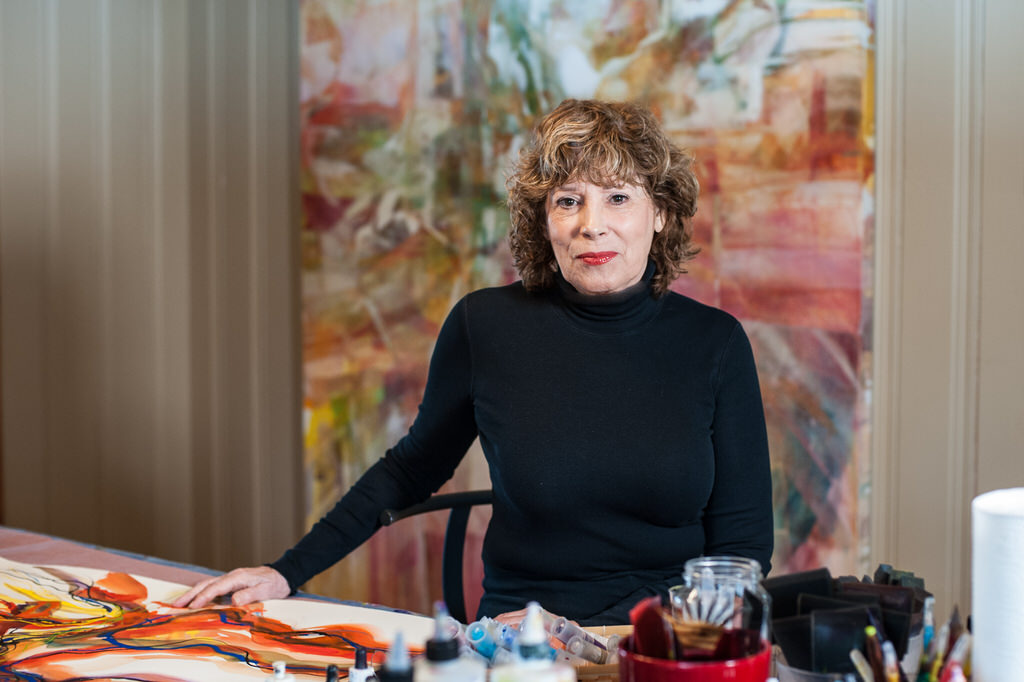 The outpouring of pure colour on Barbara Berlin’s canvas is truly an ode to the joy and energy she brings to the artistic process. Crouched over her large canvas outstretched on the floor, like a concert pianist over a keyboard, she uses contrapuntal visual elements to build lush, multi-layered images as compelling as they are complex.

With the visual tempo set at vivace, and the mood lyrical, Berlin manipulates tone and colour as a musician manipulates notes, making images that explode on the canvas like clashing cymbals, filling the two-dimensional space with rich and resonant tonalities derived from the primary colours.

But this prominent Montreal artist’s compelling surfaces are not just that. A variety of organic and cubistic shapes seem to be partially camouflaged between sumptuously layered brush strokes and a luminous background, creating a texture that invites further exploration of the depths of human and esthetic experience.

While the total effect has the spontaneity of a watercolour, Berlin brings a conscious awareness of the details and disposition of tonalities inherent in the process. She can infuse form with variety in abundance while preserving the architectural integrity of her creation.

One critic has described her paintings as ‘’soft as human tissue and sharp as shards of glass’’. While Berlin claims no formal affiliation, the gestural and colour field painters of the New School did exert a powerful influence on her as a painter in New York in the 1960’s, especially Willem De Kooning, whose architecture of colour, exuberance and energy she particularly esteems. Yet, her relationship with colour as a conductor of light and conveyor of beauty is distinctly her own, as the paintings exhibited here so vigorously exemplify.